If you live in the Orlando area and have never been to the Audubon Center for Birds of Prey, you should make a trip out. It’s only $5 to get in and they have all kinds of raptors – owls, hawks, falcons, eagles. I easily spend more than an hour there.

When you visit, they usually have one or two “Ambassadors” — the more well-behaved, resident birds. The staff take the ambassadors out into the public areas on their gloved arms and you can get up close and personal with them. The first time I went, I was amazed at how big some of the owls were (and how small American Kestrels and screech owls were)! You can get about a foot or two away from the small birds of prey they keep together at the back of the building, like the American Kestrels and small screech owls.

I had this picture of Olivia in my Flickr account and looked through the center’s Facebook and found that she died two years ago – don’t be too sad, she lived 14 years, which is about 11 years more than the average lifespan of a wild American Kestrel. The volunteers and staff at the center do an amazing job of taking care of these beautiful birds. Since 1979, they’ve treated over 12,000 injured or orphaned birds of prey, releasing more than 40% back into the wild. 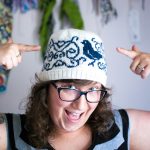